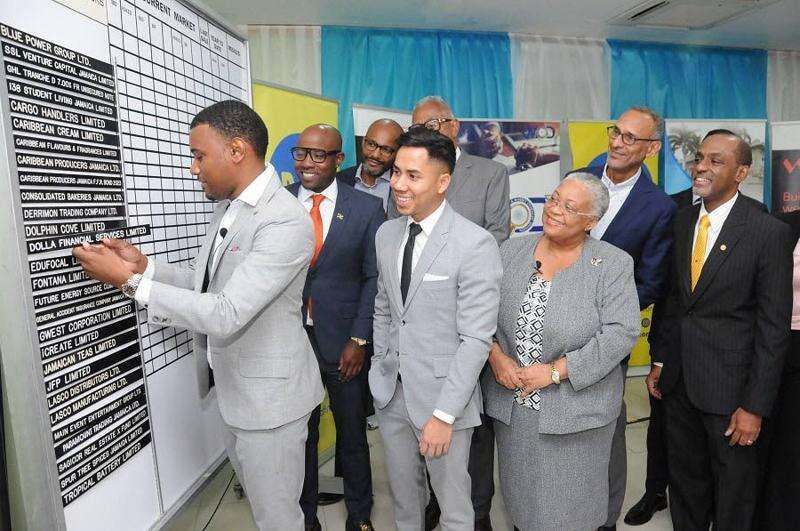 Due to the insatiable demand which came as a result of its historic listing on the Jamaica Stock Exchange (JSE) Junior Market, Dolla Financial Services Limited will be raising new capital in the form of a bond to meet the rising demand for its loan products.

The microcredit company, which listed on June 15, set another record as it published its unaudited second quarter results last Friday when the JSE rules give companies up to 45 days to publish its quarterly reports. It was the second report to be published after Mayberry Jamaican Equities Limited, in the ‘earnings season’ for companies, whose quarter ended on June 30. Chief Executive Officer Kadeen Mairs explained that the company will be maintaining this standard going forward as it aims to have its financials ready by the eighth of each month for its board and within the first 15 days after the end of each quarter for publication on the JSE.

“We have a responsibility to the shareholders and the last thing we want to see is how we’re writing for an extension after 45 days to present financial statements. Reconciliation takes the longest time and if you’re doing your reconciliation up to date during the month, then at the end of the month, you don’t have much to do,” Mairs explained in an interview with the Jamaica Observer.

Although the initial public offering (IPO) was oversubscribed to the tune of $4.76 billion with 14,981 shareholders, Dolla only received half of the $500 million from the combined offer for sale. Despite only receiving $224.83 million in net proceeds, all of the money was lent out in June to demonstrate the demand coming to the company. Mairs admitted that the IPO’s success reverberated throughout the Caribbean which has brought new-found regional attraction by variety of retail and institutional investors.

“Because of the marketing from the IPO that came around the brand, the demand for loans went up about tenfold. If a person never knew about Dolla before, he’s aware of it now because of the IPO. We have more applicants to choose from which means we can disburse better quality loans. It’s like an interview process where you’d have five people to choose from, you’re going to choose the best of five. Now, when you can choose the best out of 10, you have more options,” Mairs explained on the impact of choosing to go public.

While the consolidated net loan book was $1.05 billion at the end of June, about $94.41 million (GYD$130 million) is related to the company’s Guyana operations which account for about nine per cent of its operations. The success of the Guyana operation has pushed it to fast-track the expansion of its operations into other parts of the South American country outside of its capital Georgetown. It will also be opening ninth Jamaican branch in Portmore, St Catherine, during the third quarter.

As part of its focus to expand its regional presence, Dolla has engaged VM Wealth Management Limited (VMWM) to be its corporate financial advisors for an upcoming bond offering. The company will raise up to $1 billion under the FSC Exempt Distributions guidelines for accredited investors or to investors participating via the minimum purchase amount exemption. Dolla has an 11 per cent fixed rate loan to Derrimon Trading Company Limited which will be due on November 11 for US$1 million. Dolla has $300.36 million in debt due between April to October in 2023 to FirstRock Real Estate Investments Limited and bondholders.

“Retail [investors] believe in the brand. When we say ‘We Lend’, they know exactly what they’re putting their money in. If you look at our top 10, it’s mainly retail outside of DeQuity and FirstRock Private Equity. You still have institutions saying they’ll put some money into a bond,” Mairs added on the interest of retail investors who exuded tons of confidence in the company’s IPO.

He mentioned how persons put $20 to $50 million in individual applications based on their confidence in him. The bond raise would also result in the elimination of foreign exchange risk and extension of the tenure on its debt.

Access Financial Services is currently aiming to raise $2 billion in a bond while ISP Finance Services Limited raised a public bond of $150 million in September 2016 on the JSE. Mairs also mentioned that the company’s effective interest rate is double digits which will allow it to be comfortable with rising interest rates.

While Mairs wouldn’t get into the details of its overseas targets, he has engaged attorneys in several Caribbean territories to plot Dolla’s expansion. There is a Dolla Belize and Panama profile on Instagram while Mairs discussed The Bahamas earlier this year as a target.

The company is currently seeking out new independent board members to improve corporate governance and scope ahead of the Microcredit Act requirements. Dane Patterson and Lisa Lewis are the independent directors on the six-member board while the Act requires firms with a portfolio above $75 million to have at least a third of their board be independent.

“Just putting someone on a board because of their resume is not enough. If we need to call an extraordinary meeting with the board of directors, you want persons who believe that the company is important to them. Between the board of directors and chairman, we have a list of people that they’re contemplating. It’s just a matter of narrowing it down,” Mairs added.

The company is also starting a new venture outside of microfinance called Ultra which will be headed by former ATL executive David Henriques. The company is also pushing to broaden its renewable energy depth from international partners. Some 71 per cent of the company’s loans are secured with business loans accounting for 74 per cent of the portfolio. The non-performing loans only made up six per cent of loans at the end of the quarter.

“There’s a lot of funding internationally for renewable energy. If we are able to access it and on lend it here, it’s a different ball game. The international companies want to reach the retail market, but they’re not able to reach the market directly through an intermediary lender which will go through a commercial bank. A commercial bank isn’t going to want to give a good customer to that intermediary when they can charge a higher interest rate and get all of the loans for themselves.”

Dolla’s stock price closed at $2.98 on Tuesday ahead of its $1 listing price which gave it a market capitalisation of $7.45 billion.

“My major focus right now is getting the results out to show people that it was not a fluke. The company is not close to plateauing in terms of its performance. Every company has a life cycle and I accept that, but this company’s life cycle based on my age, we have at least another 25 years before you see us start to plateau. We can always pivot with technology based on the way the world is going. My biggest success from listing is not that I’m dealing with pension fund as the top 10, but I’m dealing with people,” Mairs ended.