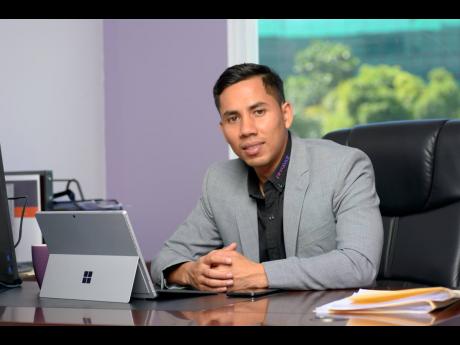 The largest shareholder in Dolla Financial, First Rock Private Equity, FRPE, has seen a tenfold increase in the value of its investment in the microlender a year after its acquisitions.

FRPE purchased 75 percent of Dolla Financial Services Limited for US$1.1 million in 2021 from affiliated company First Rock Capital Holdings. It was double the US$500,000 that First Rock Capital paid for the stake in 2020 from previous owners Stocks & Securities Limited, but was based on a valuation done by auditing and advisory firm Ernst & Young, according to FRPE Managing Director Christopher Yeung.

Dolla founder and CEO Kadeem Mairs continued to hold the other 25 percent of the microlender.

Now First Rock Private Equity is in the process of taking Dolla Financial public. A valuation of US$16.6 million ($2.5 billion) was placed on the microlender under its initial public offering of shares to the market in May.

“This represents approximately a 10-times multiple on our initial investment,” said Yeung, adding that the valuation served to push First Rock’s stake in Dolla to “about US$12 million”.

“FRPE engineered the increase in value by employing a unique active management approach which includes a financial strategy, a partnership strategy, a resource allocation strategy, a networking strategy, and a corporate governance strategy,” he said.

The strategy included increasing Dolla’s leverage by raising over US$2.5 million ($350 million) in 2021 which was used to finance loan distributions. The additional business generated resulted in a growth in the company’s loan portfolio from $294 million to $750 million, Yeung said.

The financing activity resulted in a rise in Dolla Financial’s capital increasing from $20 million in March 2021 to $373 million as of March 2022, its IPO prospectus shows.

Both First Rock Capital and First Rock Private Equity have similar directors, including Ryan Reid, but are “not part of the same holding company”, according to Yeung.

The deal occurred amid a restructuring of listed company First Rock Capital to focus on real estate, which resulted in some of its operations being hived off to independent company FRPE.

Dolla Financial’s shares were priced at $1 for the IPO.

Brokers polled by the Financial Gleaner expect the share price to climb as soon as they start trading on the Jamaica Stock Exchange, implying that the market believes the IPO was conservatively priced.

One broker said they expected a lot more growth in the company’s loan book.

“From a forward price to earnings perspective, they are attractively priced. As long as they get the financing, deploy that financing adequately, and keep the non-performing loans low it will make money and grow in value for investors,” the person said.

Yeung declined to offer a take on the Dolla stock’s likely performance, saying he would leave it to the market to determine.

“FRPE cannot speak to the share price or intrinsic value and its potential movement; however, we are very bullish on Dolla and have a positive outlook for its financial year,” he said.

First Rock and Mairs gave up 20 percent of the company for sale to investors under the IPO. Consequently, their holdings in Dolla Financial will fall from 75 to 60 percent for FRPE; and from 25 to 20 percent for Mairs whose stake is held through his company Dequity.